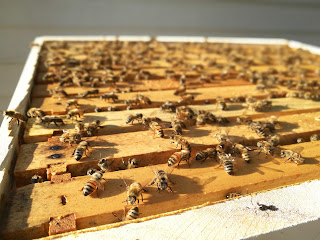 It's been a week and 5 days since we've installed the Moana hive. We cracked her open last Saturday, just to take a peek at any progress. Saw lots of brood, covered caps, larvae, and eggs. No sight of the Queen, even though she's dotted with a yellow dot.
But, since we saw eggs, that means she's been active at least 3 days ago. Not too much capped honey, but there were cells with nectar. When we first installed the hive, we had added a deep super below the medium one that was installed. I had hoped that the bees would take to it and start filling up those frames, but the last time we checked on the hive, they were pretty much ignoring it. Bees tend to build their hives up and out, instead of downwards. We may leave that deep super there, especially since that's how our sugar feeder is set up. If the bees do that well that the hive is really stacking up high, then I'll remove that bottom deep super, but for now, it can just stay. Since the feeder that we're using is located on the bottom super, we might look to changing that with the next hive, or later down the road with this one. If it's too much of a hassle to get to the feeder on the bottom super, we may move to using a top feeder instead, which is how I've learned through my Bee Club.

We noticed some cells on the top box (added a week before our install) with black larvae. Ed says this happens if it got too hot in the box. There were only a few, so not much to worry about, he says. 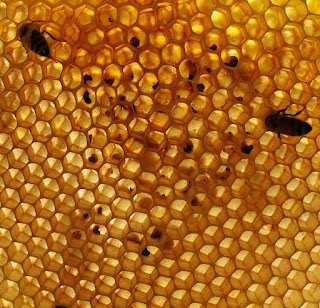 After work during the week, we've been checking to see if there are bees going in with pollen on their legs. We haven't really seen too much, which I kind of got worried about. I texted Ed, my mentor beek, and he says about 1 in 10 bees should be carrying pollen, but I feel like we haven't even really seen that. But, I still have to remember that the hive was just installed just over a week ago, we just opened the hive last week, and that causes stress on the bees. We've decided to leave the hive untouched until Ed comes to do an inspection, we'll just leave them be to do their thing. The number of flies, that seemed to be crowding around the hive after the install, have definitely gone down. Now, there are just a few flies here and there that hang around the entrance. Haven't really seen any more yellow jackets either, since the one time I witnessed one kill a honeybee, rip her head off, and eat it. Terrifying.

I've also started knocking on the hive to start learning about what a "content" buzzing sounds like. It's a low, gentle hum. Tried knocking on it early in the morning, before work one day, completely silent. To the point where I was thinking they had left in the night. They were still there when I checked them that afternoon :)  That got me thinking, that bees must sleep in. Which, makes sense, since flowers don't open up until the sun is up and out! We constantly see them around our flowers in the yard, along with some bumbles and carpenter bees, but I feel like they're doing well, but we will see how much progress they've done the next time we open her up. For now, we just have to trust that these little girls are doing their thing and just let them BEE.

Sunday, Ed came by to drop off a new set of bees. We're going to keep them in the 5-frame nuc boxes instead of moving them into a full size hive. Hopefully, they can grow in numbers so that they can keep themselves warm thru the winter. They seem healthy and busy. The bottom nuc box is full with brood and nectar. The second box was just introduced a couple weeks ago and there is one frame with comb. The next time we check on them, there should be more progress.  The new Queen is a lot lighter than the last one, who was black. These are the same types of bees, Carniolan. Her majesty, marked in yellow, born this year. On Ed's suggestion, we moved the hive location out from under the garage and closer to our back fence. This way, the sun will hit their hive earlier, prompting them to get out and start foraging earlier. Matt also built a hive stand :) We're not expecting to harvest any honey from his hive, getting them so late in the season and not having any
Read more

Yesterday, I got a phone call from Matt asking if I had seen his text message. I'm driving and #adulting so I don't text and drive anymore. The bees have swarmed. Luckily, they attached themselves to our back fence, easily accessible. I immediately called Ed and told him. He instructed me to do what I was still nervous about doing: Catch the swarm. Honeybees, when swarming, are even more friendly than when they're busy working. This video shows that. But, I'm not yet ready for that. We built a makeshift swarm box using a deep super with 4 frames in it. Got a piece of plywood to cover the bottom and the top, leaving a small gap for them to go in. We propped the box up right underneath the swarm and brushed them into the box, using a brush :)  You can see how small they are compared to the box. Normally, the whole box would be FULL of bees. In about an hour, they had all gone in. Still, their small numbers will not be enough to last them through the
Read more
By Unknown - July 25, 2017