Sunday, Ed came by to drop off a new set of bees. We're going to keep them in the 5-frame nuc boxes instead of moving them into a full size hive. Hopefully, they can grow in numbers so that they can keep themselves warm thru the winter. They seem healthy and busy. The bottom nuc box is full with brood and nectar. The second box was just introduced a couple weeks ago and there is one frame with comb. The next time we check on them, there should be more progress. 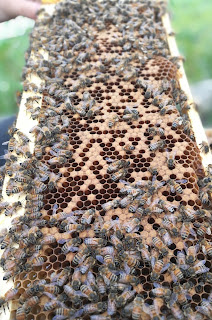 The new Queen is a lot lighter than the last one, who was black. These are the same types of bees, Carniolan.
On Ed's suggestion, we moved the hive location out from under the garage and closer to our back fence. This way, the sun will hit their hive earlier, prompting them to get out and start foraging earlier. Matt also built a hive stand :) 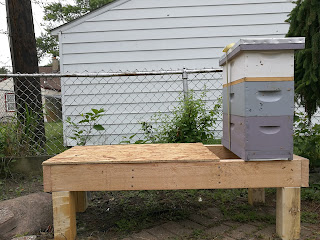 We're not expecting to harvest any honey from his hive, getting them so late in the season and not having any honey storage built up yet. Any honey they make before winter will need to be left for their food supply. Bees don't leave the hive in the winter, so the all the honey and nectar they have has to last them until the spring flowers start producing nectar. It's more of a learning experience for us, rather than a honey-hustling, money-making scheme. Once these girls survive the winter the winter, we can move them into a full size hive and let them grow!

Our old Queen, and the remaining handful of surviving workers, we're transported to a hive at the Detroit Country Club, in Grosse Pointe Farms. This hive suddenly lost their Queen a couple weeks ago, so hopefully the introduction of these foreigners will go smoothly and they'll accept them. They'll need many more bees to have a decent number going into the Winter.
In order to help assimilate the foreign Queen with the new hive, she's kept in a box, one side being covered in a wire mesh so that they can get used to her smell. One end of the box has a hole which is plugged with a wad of cotton candy. The new worker bees will eat away at the cotton candy to let the Queen out, accepting her into their colony. Then they can all get back to their business of tending to brood, building comb, making honey, feeding the Queen and drones, and the Queen can start laying eggs again, after she does a mating flight. Good luck to them!! 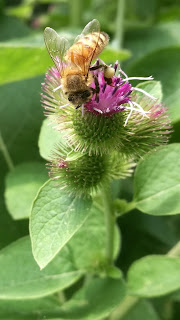 Our bees seem to be doing really well. This afternoon, they were flying in and out, pollen legs and all. That's a good sign.

Yesterday, I got a phone call from Matt asking if I had seen his text message. I'm driving and #adulting so I don't text and drive anymore. The bees have swarmed. Luckily, they attached themselves to our back fence, easily accessible. I immediately called Ed and told him. He instructed me to do what I was still nervous about doing: Catch the swarm. Honeybees, when swarming, are even more friendly than when they're busy working. This video shows that. But, I'm not yet ready for that. We built a makeshift swarm box using a deep super with 4 frames in it. Got a piece of plywood to cover the bottom and the top, leaving a small gap for them to go in. We propped the box up right underneath the swarm and brushed them into the box, using a brush :)  You can see how small they are compared to the box. Normally, the whole box would be FULL of bees. In about an hour, they had all gone in. Still, their small numbers will not be enough to last them through the
Read more
By Unknown - July 25, 2017